You are here: Home / Local Events / CLPG’s 2017 charter train links the Cotswolds with the Somerset coast 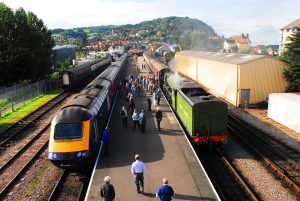 This year’s Cotswold Line Promotion Group charter train combines fast running on the Great Western main line with a trip through the Somerset countryside on the West Somerset Railway heritage line to the seaside resort of Minehead,

The excursion on Saturday, September 23, is only the second time a CLPG charter has reached Minehead. The first Cotswold-Quantock Express ran in 2010.

Many seats on board the Great Western Railway (GWR) High Speed Train have been snapped up already by members of the group, which represents passengers on the rail route between Oxford, Worcester and Hereford, but tickets are now on sale to the general public as well.

A limited number of first class tickets are still available, along with plenty of seats in standard class.

The train will leave Oxford at 7.45am, calling to pick up passengers at Hanborough, Charlbury, Ascott-under-Wychwood, Shipton, Kingham, Moreton-in-Marsh, Honeybourne, Evesham and Pershore en route to Worcester Shrub Hill. It will leave Worcester at 9.20am, running via Bristol and Taunton, and arriving at Minehead at 1pm.

The return train will depart from Minehead at 5.20pm, running via Swindon and Didcot to reach Oxford at 8.25pm. The train will then make the same stops as the outward journey to drop off passengers, arriving in Worcester just before 10pm.

CLPG chairman John Ellis said: “We know how much our members and people living along the line enjoy being able to catch a direct train to a special destination. We are looking forward to seeing friends old and new. I would like to thank GWR for again making an HST available to us.”

Booking forms can be downloaded from the group’s website at clpg.org.uk.

Completed booking forms, along with a cheque for the relevant amount, made payable to the CLPG, should be posted to:

All applications must include a stamped addressed envelope, which will be used to send out tickets in September. Anyone who would like confirmation of a booking is asked to provide an email address or an extra SAE.

Inquiries about tickets can be made by phone to Mr Clayton on 01386 701528 or by email to bcclayton@btinternet.com, or to the group’s chairman, John Ellis, on 01386 841253. Please note that anyone requiring first class seats is advised to check availability before making a booking.